An off-duty Los Angeles Police Department officer out with his girlfriend at a Lincoln Heights taco stand was fatally shot early saturday morning, police and law enforcement sources said. The officer identified as 24 year old Juan Jose Diaz, was one of two people found with gunshot wounds by a Los Angeles Police Department motorcycle officer who was flagged down by a witness about 1:00am at Avenue 26 and Humboldt Street, police said. Diaz was assigned to the Special Operations Division, which conducts investigations into department personnel, and had been on the force for about two years.

According to the law enforcement source, the young officer was eating at the taco stand with his girlfriend and her two brothers when a group of young men approached them and began making threats. One of the men lifted his shirt to reveal a handgun. Diaz and his girlfriend and her two brothers tried to get into their car and drive away to avoid a violent confrontation, sources said. As they got into the car, the gunman ran up to the car window and opened fire, fatally wounding Diaz and injuring one of his girlfriend's brothers. It was unclear if Diaz was armed, but police said there was no exchange of gunfire.

During the confrontation, the gunman claimed allegiance to the "Avenues gang", and said Diaz and his group were in its territory. The Avenues gang has long called Lincoln Heights and other parts of Northeast L.A its territory. It took root in the 1950s and derives its name from the avenues that cross Figueroa street. While its influence has declined significantly over the last decade as crime has gone down, the gang remains an influence. The gang has been known to have strong ties to the Mexican Mafia, known as "La Eme", which is a dominant force in Southern California prisons. The Avenues gang was also linked to the murder of a sheriff's deputy in 2008, in that case a group of gang members mistook the deputy for a rival gang member.

Juan Abel Escalante, who had three young children and was described as having overcome the odds of growing up in a gang-plagued neighborhood, was shot outside of his parents cypress park home as he prepared to go to work at Men's Central Jail, were he guarded some of the county's most dangerous inmates. He was adjusting his child's car seat in his vehicle when a gunman walked up behind him and shot him in the back of the head. Following the murder of Escalante, federal indictments sent more than 140 Avenues gang members to prison in 2008 and 2009.

But residents said saturday that the neighborhood has since transformed. Residents said they feel safe walking their dogs after midnight, Avenue 26 is transformed into an outdoor food market where taco stands line the street with cumbia music and hip hop playing. The crowd can be chaotic, but its always safe, they said.
Top

Crime scene of where murder occured.

he was off duty, I doubt the shooter knew he was a cop.
Top 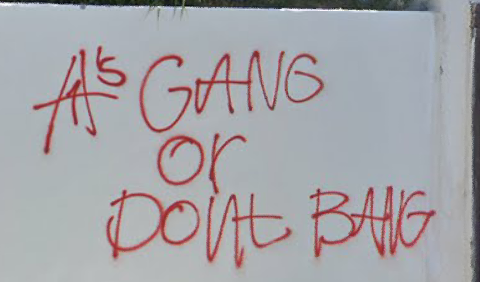