Discuss anything music from hip-hop to R&B to alternative music and all Sports.
Post Reply
First unread post • 5 posts • Page 1 of 1

I hear Chris Brown Claming Fruit Town? And shooting videos in their hood flamed up! How did this happen?? Next it will be Justin Bieber! Any thoughts?
Top

TMX broke this story about Chris Brown claiming Blood gang ties. They claim he has blasted it out on his twitter page. But, Chris slammed back at TMX. He didn't actually deny the claim but basically got mean on it. Below is a article i took from a site, and it shows a tweet to Beyonce abt Jay-Z not allowing B to collaborate with Brown.

Do you believe that Chris Brown is a part of a gang?

That tidbit of information is hard to believe since he put out a video earlier this year promoting unity and prevention of gang violence, not to mention he just recently collaborated with gang interventionists for the launch of “L.A. Unity Games” in Los Angeles. TMZ, however, isn’t buying it.

The entertainment site is claiming that Chris Brown is now repping the Fruit Town Piru Bloods, and they are using Chris’ tweet aimed at Jay and Beyonce, as well as some photos of his graffiti during his recent visit to Hawaii, as proof.

[...] Brown tagged up his signature monster artwork with the phrase “Fruits Piru,” an apparent reference to the Fruit Town Piru gang … next to the phrase, “F*** police.”

Brown’s even been claiming Piru on Twitter. He’s gotten so cocky, he called out Jay Z for not letting Beyonce collaborate with him, and bragging he’s not worried about Mr. Z because he’s got Blood ties.

Chris’s Twitter: vine.co/v/hhbuPXmuI75 looks familiar. Beyonce,U might as well go ahead and do this collab. JAY might have a problem with it but this Piru!
Top

What a lame
Top

Another Rich Kid claiming to be a gangster. Weak as hell!
Top 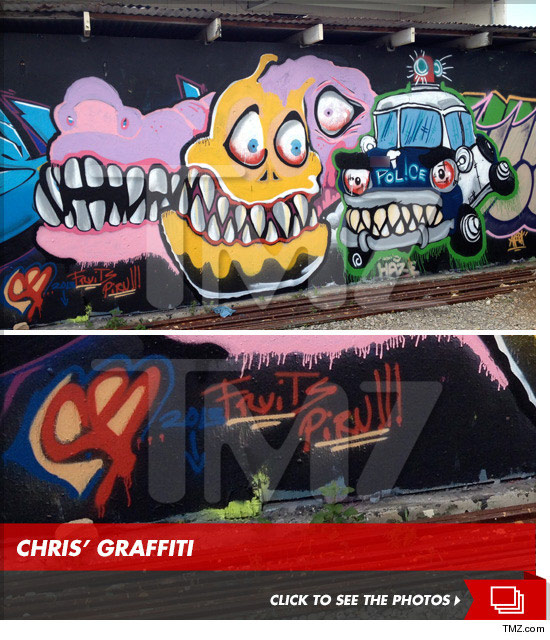 Return to “Music and Sports News”