These concepts are socially constructed and have been given much weight. What are your thoughts?
Post Reply
First unread post • 11 posts • Page 1 of 1

In this year's Rio Carnival competition, he sang a song celebrating Brazil's African roots in a performance that won his samba school the title. 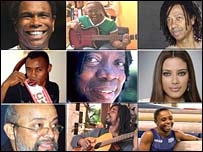 But having learned to be proud of his African ancestry, he was shocked to find out that about 67% of his genes are European and only 31% African, according to an estimate based on an analysis of his DNA.

"People will think I'm joking if I tell them this", said the singer, who knew very little about his African ancestors but nothing at all about his European ones.

Neguinho the Beija-Flor was among nine celebrities who were tested for a project, called Afro-Brazilian Roots, by the Brazilian Service of the BBC.

Brazil has more people with black ancestry than any other nation outside Africa, and its mix of Indians, Africans and Europeans gave rise in the past to the claim that the country was a "racial democracy".

But it is also a country where black people remain socially disadvantaged.

The results of the DNA tests surprised many by showing that skin colour does not necessarily reflect the ancestry of a person's genetic make-up.

Sergio Pena, professor of biochemistry at the Federal University of Belo Horizonte, who led the genetic analysis, explained the apparent contradiction.

"Only a few genes are responsible for someone's skin colour, which is a very poor indication of ancestry. A white person could have more African genes than a black one or vice-versa, especially in a country like Brazil," he said. 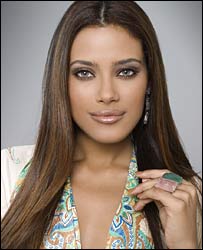 Soap opera actress Ildi Silva found that matches of the Y chromosome in her family are common in northern Europe, and that 71% of her genes are European and 19% African.

"I knew I had a Dutch ancestor from my mother's side, but I didn't know there was an European link in my paternal line as well," she said.

Genealogist Carlos Barata, co-author of the Dictionary of Brazilian Families, notes that as well as the Portuguese, immigrants from many European nations - including France, Ireland, the Netherlands, England and Germany - sought a new home in Brazil.

"The surnames might have disappeared by today's generation, but genetics can bring their contribution back to light," he said. 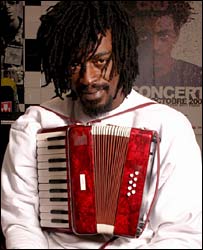 Musician Seu Jorge found that although 85% of his genes are African, the rest are European, confirmation that he is, as he put it "also the son of the guilty ones" - a descendant of the European slave-owners who had children with their African slaves.

"You need to be black to understand what it is like to get on a bus and see people getting off, afraid of you, or calling the police," he said.

"My daughter, who has a privileged education, came home one day telling us that her colleagues at a ballet class didn't want to hold hands with her. She will have to grow with this pain."

The BBC Brasil series has had an impact in Brazil, where the issue of racial quotas is highly controversial.

About 40 universities in the country have set aside places for black students.

Manolo Florentino, head of the Social History Department at the Federal University of Rio de Janeiro, said the results "show race is a failed concept in Brazil".

Referring to the university quotas, he added: "Policies that 'racialise' this country, following the example of the US, create hate and tension and will make the situation worse."

But for organisations that defend the quota system, genetics should not be used to attack anti-discrimination policies.

They argue that genetics might prove that all Brazilians are very mixed in terms of their racial ancestry, but it is naive to believe that society will consider all equal.

"I've never seen a policeman asking for a genetic ID before stopping someone. In Brazil, discrimination is based on appearance, not on genes," said David dos Santos, a priest who co-ordinates a scheme to prepare underprivileged Afro-Brazilians to go to university, and who was himself tested for the series.

'Face of the future'

Musician Sandra de Sa said that despite its racial tensions, Brazil could teach the world how different races can integrate.

She was happy though to find out she was about 93% African.

"I can't believe I'm almost 100% African. I usually jokingly say that I can still feel the chains around my ankles," said the singer.

The ancestry of the nine celebrities revealed other surprises. 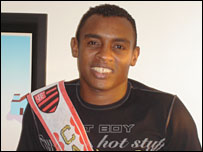 Footballer Obina was not aware of his indigenous roots

Obina, a football player in Flamengo, the biggest team in Brazil, had 25% indigenous genes, the highest percentage in the tests.

His Y chromosome was traced back to the Middle East, possibly an indication of a Jewish ancestor among the many escaping persecution in Portugal and Spain some 500 years ago.

"No-one is pure in Brazil. That's why the country has the face of the future," said Harvard Professor Henry Louis Gates Jr, co-ordinator of a similar project in the US.

The mixing of races so evident in Brazil will become more prevalent around the world, Professor Gates believes, with people originating from a sole geographical area becoming increasingly rare.

Two readers of bbcbrasil.com chosen from among more than 2,000 who applied to have their DNA tested will have their results published this month.

Their story will focus on how genetics is revealing black ancestors long excluded from family history because of racism.

But it is also a country where black people remain socially disadvantaged.

socially disadvantaged?! if your poor in brazil, you go up the side of a cliff and either build your own house or move into a little shack made of clay, in an area controlled by drug lords. most of the people living in these areas are black, depending on which provence you are in. and if you really want to see some police brutality and mistreatment, you people should look into corrupt cops in rio. i think socially disadvantaged is a compliment compared to what poor and more specificly poor afro-brazilians go thorugh.


"No-one is pure in Brazil. That's why the country has the face of the future,"

what i find interesting about brazil, is that brazil was founded quite simlar to america. europeans came over with slaves, and a portion of them intermated. its similar except america had less african slaves, and instead of a majority of portuguese, spanish, and italian immigrants in its early years, we had english and dutch(and of course different kind of native people). but in brazil, they are all pretty proud of being brazilian and no matter their actual background, still call themselvs brazilians. that is such the case in many diverse places as well, places like puerto rico, dominican republic, other diverse nations around the world. in america when we describe ourselvs, we don't really characterize ourselvs as americans.
Top

so is it worst for "darker skinned" people over there than here???
Top

my man, type in "favela" into google images and see what comes up. the majority(i would say at least 75%) of all people living in those places are decendants from african slaves.
Top

se11 wrote:my man, type in "favela" into google images and see what comes up. the majority(i would say at least 75%) of all people living in those places are decendants from african slaves.

ummm i see.....so if i would take a trip down to rio de janiero (being a carmel skin african american) would i be treated worst ,better or the same down there????
Top

you'd probably be treated differently, because they'd know your american. i have never been there, but i have heard some people are really friendly to americans and women like american guys, and i have also heard that really toursity looking americans are particular targets of robberies. and also(i think, just going on what i've heard, read, and viewed), rio is a more diverse city, where even though many blacks do live in favelas and poor areas, the established ones fit in more with life, as they are. sao paulo, is much "whiter" city and i've heard to succede man blacks tend to be more white or as quoting from a show "paint themselvs white" to fit in better.
Top

se11 wrote:you'd probably be treated differently, because they'd know your american. i have never been there, but i have heard some people are really friendly to americans and women like american guys, and i have also heard that really toursity looking americans are particular targets of robberies. and also(i think, just going on what i've heard, read, and viewed), rio is a more diverse city, where even though many blacks do live in favelas and poor areas, the established ones fit in more with life, as they are. sao paulo, is much "whiter" city and i've heard to succede man blacks tend to be more white or as quoting from a show "paint themselvs white" to fit in better.

went to brasil years ago as a teenager. i am blac. when i was there didnt feel any racism from ppl who spoke a dfferent language than me. i went to rio and also to small villages along the amazon that i do not know how to spell. most of the ppl in these "villages" looked indian. last year around this time i met a family from brasil and it turns out the mother was here in the states studying the similarites between dscrimination against africans and ther descendants around the world..anyway her telling me about the study she was doing was the first time i heard about blacs being mistreated in brasil. and this family being of brasil very likely had african and european roots but resembled indians the most. when i was in the country tho i felt warmth and people seemed very friendly
Top

It's interesting that most of the people tested were a mix african and european with no indigineous, escept that one guy. Maybe the indian ancestry is limited to certain area like Amazon.
Top

well i think its probably strongest in those village areas but definitley not limited to them.
Top

brazil has a huge mix of people. it was founded by portuguese, was inhabited by natives, has the most africans outside of africa, has a strong spanish, german, italian, polish, and overall european influence, and also has quite some immigrants from uruguay, argentina, ect. and even japanese have 1.5 million immigrants there. different provinces have more influence of one or the other
Top
Post Reply
11 posts • Page 1 of 1