After the seizure, through radio frequency were death threats against members of the municipal police and about the military commander warned that they are prepared for any attack


TIJUANA. Elements of state and municipal police, in coordination with the Mexican army, seized about 105 tons of marijuana, in an operation that began yesterday at dawn and ended hours later.

The commander of the Second Military Zone, Alfonso Duarte Mujica, confirmed the seizure of the drug that was involved in 10 000 packages that had different markings, and explained that it is the greatest achievement in the last three years in Baja California.

According to preliminary calculations, the drug would have been sold in Mexico in about 210 million doses, or 4 thousand 200 million pesos. In the U.S. the cost could double and even triple, the military chief said.

Eleven suspected traffickers were arrested in the actions that took place in an area of the Ejido Chilpancingo Arroyo Alamar, a delegation of Otay Mesa, in the division The Soler, Playas de Tijuana delegation, in a house located in Playas de Rosarito.

After the seizure, through radio frequency were death threats against members of the municipal police and about the military commander warned that they are prepared for any attack.

The Municipal Public Security Secretary, Julian Perez Leyzaola ruled out any change in the operations of that corporation.

Duarte Mujica said that local agents spotted a suspicious convoy of men, so they tried to intercept them and as a result, the crew opened fire on them, with the result of a policeman wounded and injured an aggressor.

The Mexican Army and the State Preventive Police supported the operation of detention and investigation, which was located a home in Arroyo Alamar and then the other where the rest of marijuana.

The 10 thousand packages were wrapped in packages of various colors, even had inscriptions such as "engineering", "yoyo", "dog", "fox", "cap", "pony", "Dalmatian", "ram's", "wolf "a star, a bumper face and even cartoons.

Duarte Mujica said that so far it is unknown which group criminal belonged to the drug, but warned that the seizure represents a blow to the financial structure of organized crime.

The commander said that the evidence obtained at the moment is very likely that was unnerving to Baja California by the different routes from the south, and split into smaller vehicles was taken to the cellars. 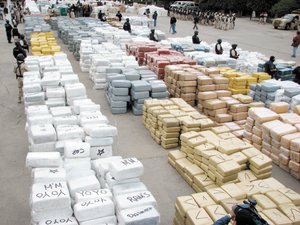 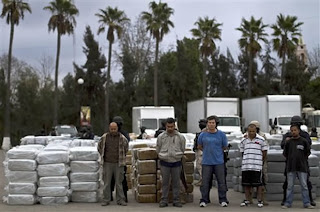